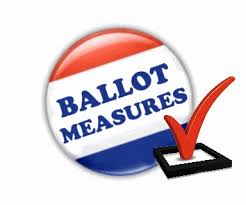 This is a legislatively referred constitutional amendment that would extend an existing property tax exemption available to qualifying seniors and disabled veterans to the surviving spouses of military service members who died in the line of duty and the surviving spouses of veterans who died as a result of service-related injury or disease.  A 55% majority is required for this amendment to be approved.  It received bi-partisan support from the CO Legislature – in fact, no legislators voted no to referral.

Allows the operators and managers of charitable gaming activities to be paid and allows the legislature to determine how long an organization must exist to obtain a charitable gaming license. Amendment F is a constitutional amendment to change the rules around charitable gambling in Colorado.

Charitable gaming is defined as bingo, pull-tab games, and raffles that charitable organizations operate. The amendment proposes to lower the number of years an organization must have existed before obtaining a charitable gaming license from five years to three years and to allow charitable organizations to hire managers and operators of gaming activities so long as they are not paid more than the minimum wage. This is very similar to Amendment C in 2020, which failed. It is a bespoke issue that raises very little revenue and affects a small number of organizations and citizens, with no apparent partisan bias.

Reduces the allowable state income tax deduction amounts; creates and funds the Healthy School Meals for All Program This is a legislatively referred state statute that would create and fund the Healthy School Meals for All Program provide free meals to all students, regardless of income level.  The program would be paid for using a reduced tax deduction for individuals with a taxable income of $300,000 or more.  The Proposition was referred to the ballot on largely partisan lines with all Democrats in favor and 87% of Republicans opposed.

Two organizations that support this proposal are Healthy School Meals for All and Hunger Free Colorado.  In their words, the free and reduced-price meals program income threshold is too low to truly account for children and families facing food insecurity. School Meals for All would eliminate lunch debts so families can focus on other needs like housing, utilities, and more. It would also prevent students from feeling stigma or shame when their families cannot pay for lunch. The ballot initiative would raise $100 million per year to cover the costs of the program through the closure of tax loopholes for high-income earners.

Proposition GG requires a table showing changes in income tax owed for average taxpayers in certain brackets to be included in the ballot title and a fiscal summary for any citizen initiative that would increase or decrease the individual income tax rate.  A “yes” vote supports requiring the ballot titles and fiscal impact summaries for initiatives that affect income taxes to include information on how the change would affect income taxes for different categories of income.

A “no” vote opposes this measure to change the requirements for initiative ballot language, thereby leaving in place the existing requirements for ballot initiative fiscal impact statements and not requiring ballot titles to include a table of tax changes. According to Sen. Brittany Pettersen, “[The measure is] an incredibly important tax transparency measure.”

Colorado already has a flat tax system which is disproportionately hard on lower income individuals. Lowering the state income tax is far more advantageous to the wealthy in the state. State income tax has gone from 5% in in 1987 as well as a graduated tax then to a current flat tax level of 4.55%. The big winners are wealthy individuals, large corporations and outside corporations doing business here. Our flat tax and continued reduction of income tax, both individual and corporate, combine to push the need for even more regressive revenue sources such as fees and higher and higher sales tax which, again, disproportionately affect lower income Coloradoans.

Colorado also has a balanced budget requirement hard-wired into our constitution. We cannot simply remove taxes as a revenue source for Colorado as the proponents of prop 121 want. The proponents have already managed to reduce the income tax percentage in 1999, and 2020. Colorado has one of the lower income tax rates in the U.S.

Right now, the state is flush with revenue, mostly due to an influx of federal covid money, this will not last. If/when the revenues fall significantly the state will have less money to fund programs and may result in the further use of the BS factor that prevents the full amount of revenue going to education in Colorado and, instead, is an IOU to our schools.

Make sure to read the arguments in the Colorado 2022 Ballot Information book found at this link:

APA IS NEUTRAL ON THIS VOTE

There is more and more research being done on how the brain works, how substances can affect the brain and how substances, long thought to be detrimental, can help addictions, anxiety, PTSD and severe depression. This proposition would decriminalize the use of certain plant-based psychedelics and allow use, under guided supervision, by individuals 21ys and older. Many people with mental health issues struggle with finding help; this could be one more tool that can help. There are no known addiction issues to the use of these drugs.

See list of endorsements from multiple nonprofits, housing agencies, legislators and even the Colorado Municipal League at https://yeson123co.com/supporters

This measure allows an equal number of licenses for drugstores, grocery stores and liquor stores.
This measure would allow liquor stores to operate in more locations. This would benefit larger economic interests at the expense of smaller “mom and pop” liquor stores. Colorado has over 1600 independent, locally owned stores that provide a wide variety of products. It also could hurt the craft brewing industry in Colorado if these single location stores are replaced by chains with uniform product selections from larger distributors.

APA IS NEUTRAL ON THIS VOTE

The “Colorado Liquor Code” shall be amended to permit, beginning March 1, 2023, and the home delivery of alcohol sales made by licensed retailers through third-party home delivery service providers.  Proposed by Levi and Mendyk

Proposition 126 would allow third-party delivery services to deliver alcoholic beverages from grocery stores, convenience stores, liquor stores, bars, restaurants, and other liquor-licensed businesses. It would make permanent temporary measures to allow bars and restaurants to deliver alcohol, which has helped them survive the pandemic. Currently, retailers are allowed to deliver alcohol using a store-owned vehicle by an employee who is at least 21 years old.
This measure is supported primarily by bars, restaurants and grocery stores to increase sales. Small liquor stores could be harmed by unfair competition from grocery stores and national liquor store chains. Enforcing liquor laws would be more difficult because the measure makes the delivery the company liable to obey liquor laws and many of these companies treat their employees as independent contractors and avoid responsibility.

Provided that no local tax rate or mill levy shall be increased without further voter approval, shall Jefferson County, Colorado be authorized to collect, retain, and expend all non-property tax revenue, such as state grants, retained and expended starting in 2022 and each subsequent year thereafter, notwithstanding the limitations of Article X, Section 20 of the Colorado Constitution or any other law?

This will allow Jeffco to “de-bruce” for at least state grants and other non-property tax revenue. As of now the county is limited from getting state grants (for things like wildfire suppression, affordable housing, etc.) because those amounts are counted against the county “TABOR cap”.

Read about JeffCo’s funding challenges at

Shall Jefferson County taxes be increased by $600,000 annually in the first full fiscal year (2024) and by such amounts as are raised thereafter by imposing a sales tax between three and six percent (3-6%) on the sale of retail marijuana and marijuana products within the unincorporated areas of Jefferson County?

Areas that don’t allow for the sale and manufacturing of marihuana also forgo all of the local taxation and business activity such enterprises generate. Amendment 64, the 2012 law allowing adult use of marijuana in Colorado, also allowed each county and municipality to decide whether to let medical and recreational pot businesses operate within their limits. Much of the state of Colorado (over half of the counties in Colorado but not half of the population . . .) still prohibits the sale of either medical or recreational marijuana. Statewide, Colorado residents benefit indirectly from marijuana taxes regardless of where they live (i.e., 1% of the state’s total education budget come from marijuana taxes) regardless of whether they live in a jurisdiction where marijuana sales are allowed. However, folks in Colorado who reside in areas where the sale and manufacturing of marijuana are locally prohibited are also prohibited from indirectly benefiting in the local economic activity and local taxes generated by those businesses.

Counties in Colorado That DO NOT Sell Weed