Our Story: Who We Are And What We Stand For 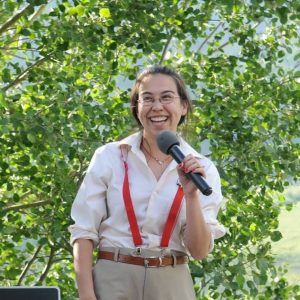 Like many Americans, the founding members of Arvadans for Progressive Action (APA) felt crushed by the sheer amount of work that needed to happen in the wake of Donald Trump’s election. We knew that he didn’t merely present a threat to the few gains the country had made from environmental and labor protections to race, gender, and LGBTQ+ rights; he was a threat to people’s very lives. We had worked in our individual capacities for many different progressive causes, but it was time to come together and create a coalition of progressive ambitions to fight defense and offense, on all progressive battlefields, simultaneously.

APA’s first meeting was a response to an email from Working Families Party and sent by Rachael Smallwood, and was simply intended as an invitation for neighbors to come together – the organizers weren’t yet aware that they were about to start an influential organization that would continue to organize to this day. The first meeting was supposed to be in a neighbor’s living room, believing that the RSVPs would reach around 7. Over 50 responded. Some quick planning had to happen in order to accommodate such a crowd, but the organizers were able to secure the First United Church of Arvada as their first meeting space. The group of neighbors met, some for the first time, on November 26, 2016.

The organizers were taken aback when everybody demanded to know when we would meet again. They had not counted on people wanting to continue organizing for change. But they were surprised and pleased with the spirit of the group.

We arrived on the name Arvadans for Progressive Action after discussions and a democratic vote. We wanted the name to reflect who we were and what we were striving for. However, the name is not entirely accurate. We have many members from all over, including Westminster, Wheat Ridge, and even as far-flung as Boulder. We have people on our email list from North Dakota, California, and Iowa.

The spirit of APA is a coalition of progressive voices given the opportunity to pursue what is most important to them. In this way, we have been able to develop the foundation of our group: action teams that consist of smaller groups of APAers that focus on advancing their issue. These action teams consist of: Human Rights, Economy, Environment, Health Care, Education, Anti-War, and Political Action. Our Anti-War Action team pursues lobbying elected officials and is arguably our most federally involved Action Team. The Economy Action Team focuses on affordable housing in our community and hosted Arvada’s Housing Fair. Our Political Action Team manages our endorsement process, which helped get a progressive-leaning majority on the Arvada City Council and helped elect Brianna Titone, the first openly transgender woman in the state legislature. Our Environment Action Team spearheaded the effort to get organized waste and recycling to improve our community’s carbon footprint. Our Education Team partnered with Great Education Colorado and Fair Tax Colorado to advocate for additional funding for public schools across the state. And, our Health Care Action Team has become a leading voice in the fight for universal health care by hosting many events with excellent speakers to advance their cause.

APA is currently led by Brian Arnold-Renicker, Robin Kupernik, and Caroline Zimmerman. Their fearless leadership enables APA’s action teams to have the space and tools they need to advance their causes and enables the group as a whole to meet on a monthly basis to learn about and discuss important progressive issues.

Regardless of the 2020 results, our work will continue to push for a progressive vision of Arvada, Colorado, and the Nation. We will always strive for a better world and to dismantle systemic injustices everywhere.